The image is of a multi-colored background with crochet thread radiating across the canvas. White Fleece letters are quilted onto the canvas spelling out the words ‘Hands Up, Don't Shoot’

I was inspired to name this piece Black Lives Matter: Hands Up, Don't Shoot (2021) from the rallying cry from Ferguson, Missouri residents who took to the streets to protest the fatal shooting of a Black 18-year-old by a White police officer, Darren Wilson. Witness accounts spread after the shooting stating Michael Brown had his hands raised in surrender, mouthing the words “Don’t shoot” as his last words before being shot execution-style. The gesture of raised hands became a symbol of outrage over mistreatment of unarmed black youth by police. 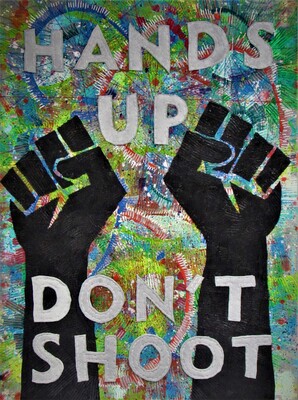 This work is licensed under a Creative Commons Attribution-NonCommercial-Share Alike 4.0 International License.